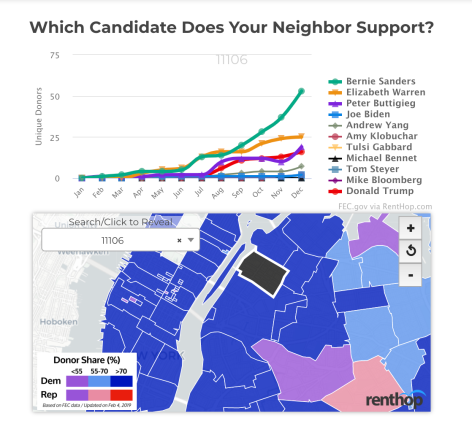 A RentHop study breaks down donation numbers for presidential candidates per zip code. Doesn’t seem like much has changed in recent months, citywide or in LIC-Astoria.

Last year, the new study shows, the 1106 zip code had 53 donors for Bernie Sanders, with 25 for Elizabeth Warren. That’s a nearly parallel rise from 20 for Bernie and 16 for Warren as of last October, but with Bernie doing better. The Queensbridge-Ravenswood area zip code also had 19 Pete Buttigieg donors and 16 Trump donors.

In 11101 (lower LIC), the ratio is similar: Bernie had 53 donors, whereas Warren had 35. Lower LIC also had 30-something donors for Yang (dropped out) and Buttigieg.

In 11102 (Central and waterfront Astoria), there were 41 Bernie donors, 25 Warren Donors, and 13 Buttigieg donors. In that zip, there were also 10 Yang donors and eight Trump donors.