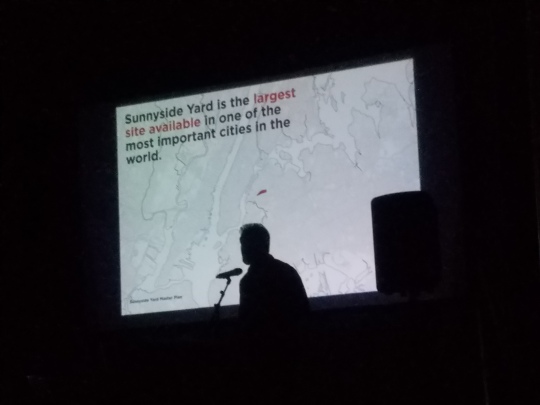 Vishaan Chakrabarti – whom for some reason was only addressed as “Vishaan” – the head architect involved in the Sunnyside Yards master plan, had the P.S. 166 auditorium lights dimmed to better show his slide show, leaving him a silhouette against abstract layouts of the rail yard. He expressed how given the high rises at the Queens Plaza end of the yards and the near-suburban Sunnyside Gardens district at its opposite end, the team was looking into wider spread mid-rises, and not just high-rises. He said the team was looking for a “sweet spot” of human scale blocks. He said the yards is an opportunity to right wrongs such as trash piles and sludge puddles at curbs.

But the first question, from a Community Board 2 member, was how this was going to be paid for. Neither Chakrabarti or Cali Williams, who leads the master plan team, wanted to discuss the price tag, which has been projected at $16 to 19 billion. “This is a complicated and challenging site,” and the costs and funding will be figured out along the way, Williams said.

This was the second public meeting for the Sunnyside Yards, two years after a feasibility report was released. About a year ago, Chakrabarti’s Practice for Architecture and Urbanism, was tapped to join the master plan team, with Williams, an Economic Development Corporation vet, at its head.

When Williams tried to end the Q&A to get to the breakout sessions, a woman interrupted her to say there were more questions in the room, which filled out with a few hundred people. Many applauded the interruption. Williams caved and said she’d allow two more questions.

The first questioner then, thanked and praised the planning team. “What I hear is that you guys want to do the right thing,” he said. “Nobody gets shafted in this, generally.”

That guy set the whole thing off. A younger guy near me stood up and shot back about how his friends have been removed from Astoria, Ravenswood and the nearby neighborhoods. He said when the affordable units come, “good luck trying to win the lottery to get there in the first place!” Many people applauded.

I attended a breakout session on urban design. Somehow I wound up at the one table, apparently, that didn’t have any activists. First our guide showed us pictures of existing buildings, each from a neighborhood in Western Queens, with a corresponding grid showing how much Floor Area Ratio the building used per block. We were asked to put a sticker on the picture we thought would be most appropriate for the Sunnyside Yards. After examining all the pictures, I pointed out that the pictures were misleading – and I wasn’t trying to be especially clever. The tallest-thinnest looking building somehow took up more space on a block than a smaller and wider-looking building took up of a different block. And the buildings were all totally different styles, including public housing.

After we placed color coded stickers all over a map of the Sunnyside Yards so it looked like a Twister mat, each table was supposed to report its discussion. The first person said we shouldn’t give away public land to developers. The next said the land should be a public land trust. The third said, “Don’t sell public land to developers.” I noticed that Chakrabarti was standing at the side watching. No one at my table wanted to speak, so our guide spoke for us about building height placements. Our table was the first to not get any applause. The next person said the existing neighborhoods should be considered so nothing “new” should be built, though I didn’t understand what she said. Then a guy went on a dramatic soliloquy, which I doubted represented his table so much as himself, about the importance of the Sunnyside Gardens, as if everyone cares about the Sunnyside Gardens. Then, the same young guy who had shouted near me in the auditorium, stood up for his table and said the Sunnyside Yards should be 100% affordable with worker-owned businesses. He also wanted to see investment in Queensbridge so the residents are not “displaced.” He (or his table?) also wanted small buildings. I should note that this guy exists in every public city meeting of this sort. The last person I quoted, said, “We don’t need any starchitects” bringing their ego into the neighborhood.