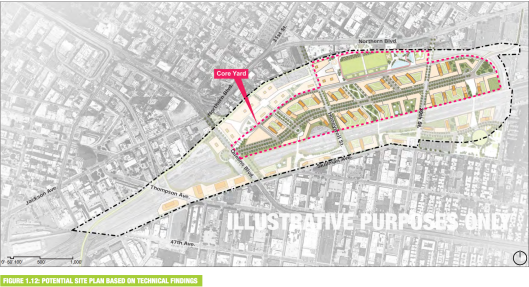 The city is officially moving forward on developing a neighborhood over the Sunnyside Yards by launching a master planning process this summer. The Economic Development Corporation announced today that Alicia Glen, deputy mayor of economic development and Anthony Coscia, chairman of Amtrak, which owns most of the space, signed a letter of intent to collaborate on the plan. The EDC’s announcement confirms Crain’s New York Business’ March 29 report that urbanist Vishaan Chakrabarti will be heading the master plan team. But more people are involved! Cali Williams, an EDC vice president for the last decade, now has the title: director of Sunnyside Yard. And a steering committee headed by Elizabeth Lusskin, president of the Long Island City Partnership and Sharon Greenberger, head of the YMCA for Greater New York (what?) will be consulting on the plan. But wait… what about elected officials who don’t want this to happen?

#Proud to be leading #SunnysideYard master plan with an amazing @NYCEDC team. https://t.co/PppzkTqIfD

“This is a once in a generation opportunity for civic groups, public officials and residents to create a vision for their borough” Deputy Mayor @AliciaGlen https://t.co/7WIOXpfDxy

City Councilman Jimmy Van Bramer, whose district spans both the LIC and Sunnyside sides of the yards, has been vocal against this project. How the EDC and mayor’s office will be able to push this ahead without the support from the 26th city council rep, I’m really not sure. The yards would have to be rezoned to allow residential development and super tall buildings, something the council member would have to approve. Sunnyside Post reported shortly after the EDC’s announcement today that JVB and State Rep. Catherine Nolan, who also opposes the plan, complained the city went around them on this. Well of course.

“It certainly would have been wise to give folks a serious heads up that this was happening. I think catching people by surprise is the last thing you wanna do on something this controversial.”

“I have worked closely with the Mayor on many issues and it is shocking to see community voices denied in this process at the very beginning.”

The EDC says it did invite them to be part of the steering committee. But uh.

The planning process is anticipated to take 18 months and will involve community outreach meetings. Should be fun! Here’s a list of the rest of the committee: