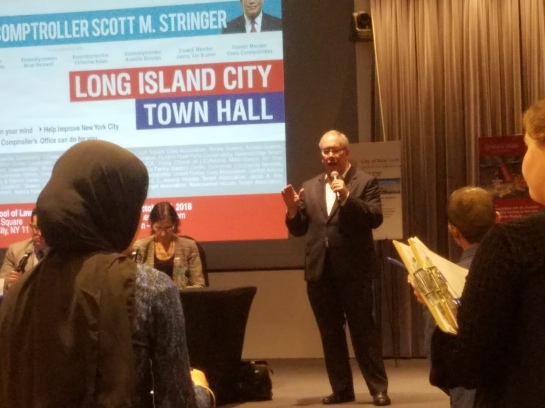 A great grandfather at the front of the line for the microphone told Comptroller Scott Stringer he’s sick of bridges and streets getting named after politicians. Stringer said he admitted he fantasized of one day telling his son that “Stringerway” was once called “Broadway.”

Stringer, an almost-2013 candidate for mayor and thought-to-be 2021 mayoral hopeful, had the jokes at his Long Island City town hall at the CUNY School of Law. When one person insisted that City Councilman Jimmy Van Bramer has his eyes set on being mayor, Stringer said, don’t you hate people who want to be mayor?

Stringer wasn’t just here to understand the needs of one region of Queens. He was here to make allies in his fight against City Hall – and probably for it. He knew that many of the complaints would be about housing and development. That’s everywhere, but in LIC, the towers are shooting up around us into the sky and the people are anxious about school space, train space, park space and sewage. Stringer is positioned as a high-level politician with views juxtaposed to the mayor’s housing strategy, setting himself as a more progressive alternative.

“I don’t believe that this is how we should build our city,” he said in reference to Alicia Glen, deputy mayor for economic development. “We’ve got to change the system. And the way we’re building our city is, we’re doing it backwards.”

Brent O’Leary of the Hunters Point Civic Association brought up the Economic Development Corporation’s controversial plan to develop property on 44th Drive by the river for private development.  Locals have argued the area should be used to build a school. Stringer said it’s disgraceful they would remove a building that could be used for kids. “EDC should be ashamed of itself,” he said.

Someone else complained about the pace of construction for the Hunters Point branch of the Queens Library. She asked if his office has reviewed the project. The issue, he said, was “agency incompetence.” He said a review by his office would take 18 months, so, it isn’t worth it. “I think it’s pretty well recognized that it’s been a pretty bad situation.”

By the entrance of the room on a table were piles of reports from his office but Stringer was there to present his alternative vision as well. He said City Hall shouldn’t be making last minute negotiations with developers over a number of affordable units. “This kind of negotiation should be a thing of the past.” And while Mayor Bill de Blasio has his sights on bringing residential towers to the Sunnyside Yards, Stringer sees a more distributive way in citywide vacant lots. “Why are we giving away the land we own to those developers?” he said, referring to his audit finding 1100 vacant city parcels he says could be used by non-profit developers. “We put too much emphasis on the people who build luxury.”

One testifier said he would vote for him for mayor. “Say it again?” Stringer said. “I couldn’t hear you.”